Compared to other languages, English appears relatively easy to learn on paper… until you realize it doesn’t play by the rules. There are many exceptions to American grammar rules, and on top of that, Americans use all sorts of phrases and idioms in everyday conversation. So much so that even other English-speaking countries get confused. Did you ever tell someone to break a leg? Or how about killing two birds with one stone?

By examining more than 1,000 Google search terms, we determined which American phrases are the most puzzling to the world. We also figured out which specific phrases trip up people from one continent to another. 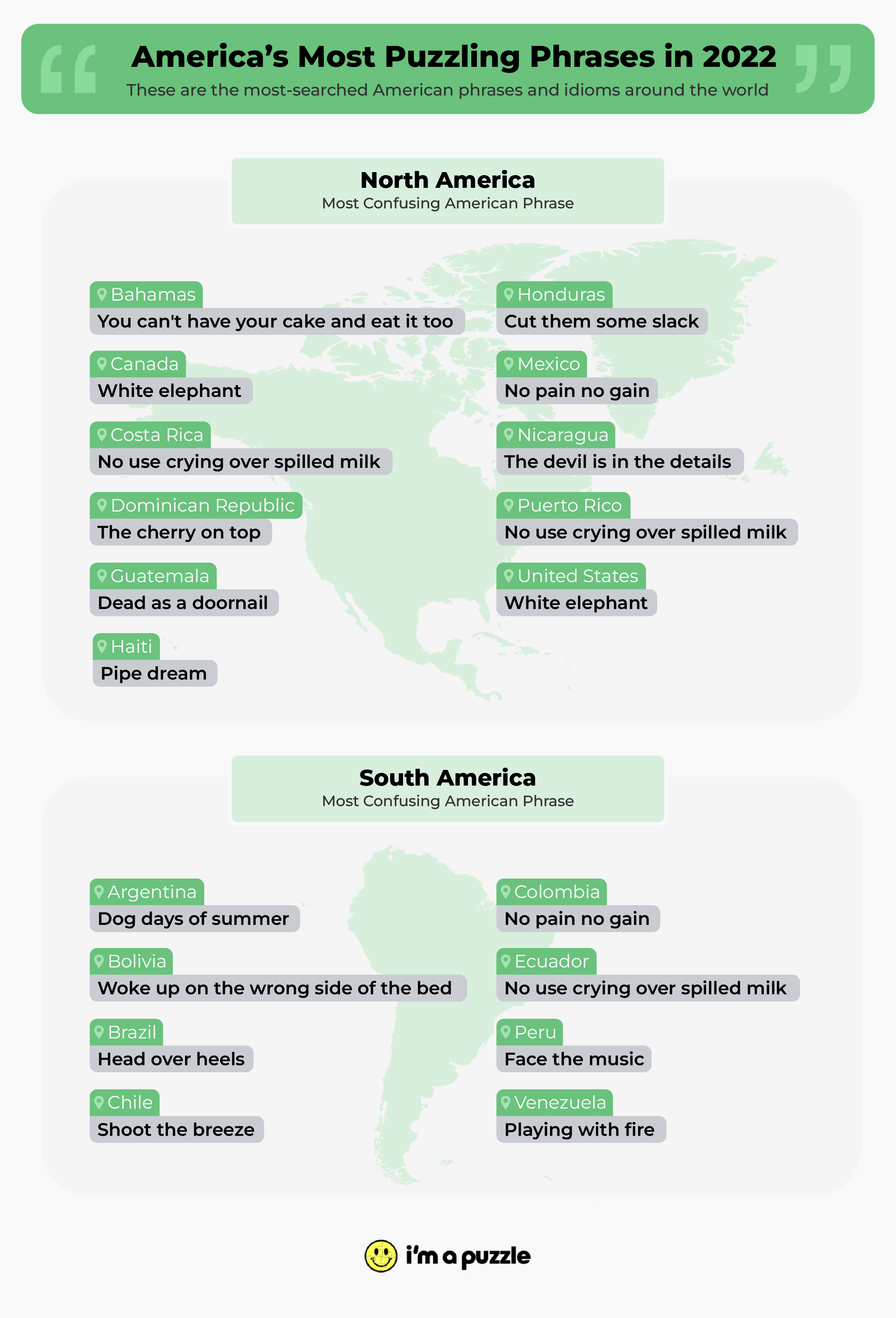 Apparently, Canada doesn’t throw those white elephant parties around the holidays where you give cheap, often comedic gifts. The most confusing phrase to Canadians is “white elephant.” Funny enough, white elephant was also the most Googled phrase in the U.S. Meanwhile, Mexico’s top search was “no pain no gain.”

Both Costa Rica, Puerto Rico, and Ecuador turned to Google to figure out what the phrase “no use crying over spilled milk” means.

One of the most confusing phrases across the globe is the meaning of “woke up on the wrong side of the bed.” It was the top searched phrase in five countries including Bolivia, the Ivory Coast, Mozambique, Papua New Guinea, and Yemen. 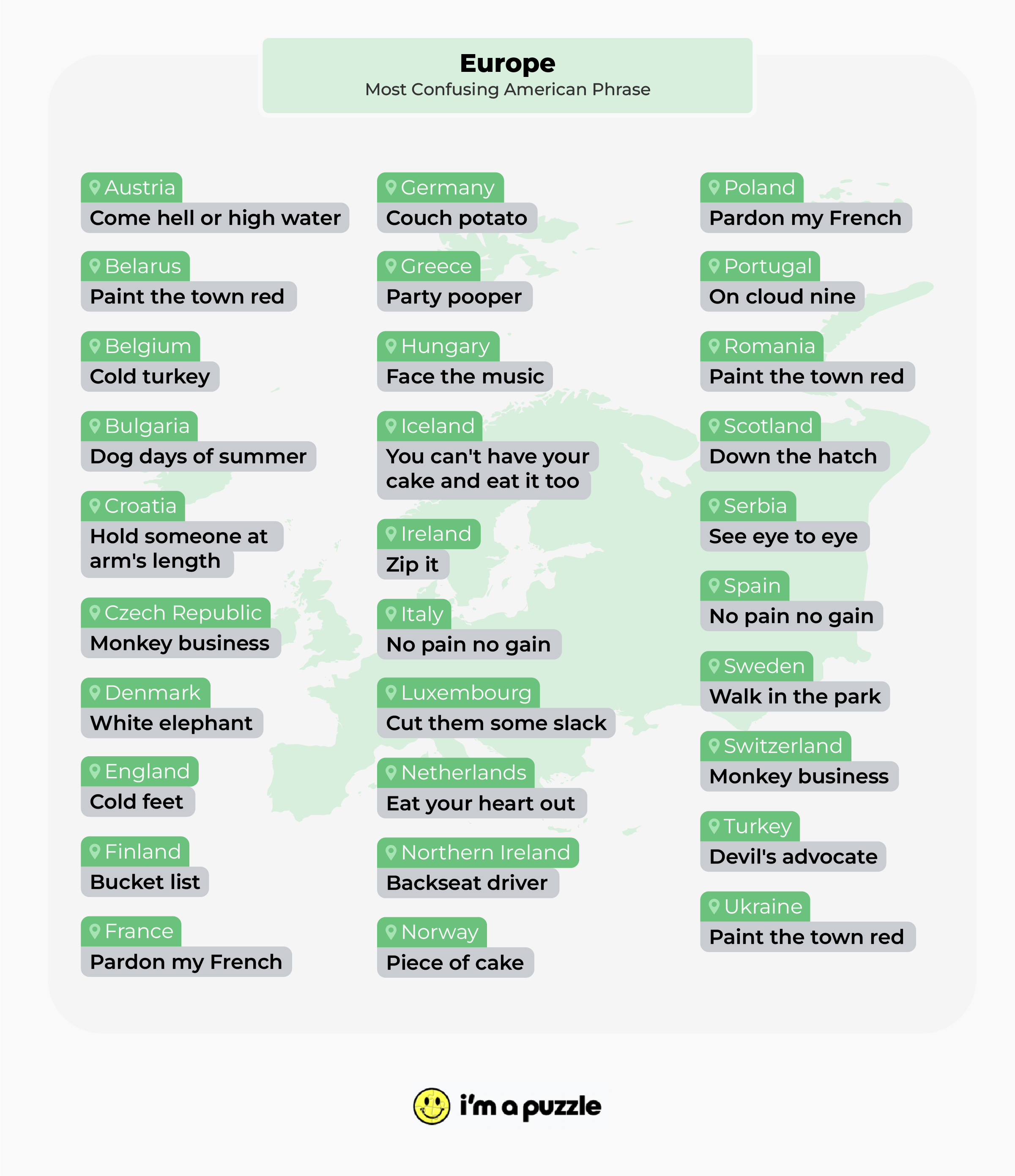 Places that primarily speak English have just as much trouble breaking down these American phrases as other countries. The most misunderstood American phrase in the United Kingdom (and England specifically) is “cold feet.” Northern Ireland isn’t sure what a “backseat driver” is, and Scotland needs to know what “down the hatch” entails.

Across Europe, the Czech Republic and Switzerland don’t understand what “monkey business” means. Belarus, Romania, and Ukraine all searched for the same phrase: “paint the town red.”

This one may make you smile. We found out that France wanted to know what the phrase “Pardon my French” actually means. It apparently was a phrase that started in England, and while it is often used after people swear in America, the French do not use it as such. “Pardon my French” was also the top searched phrase in Poland.

Some European countries were the only places on the globe to look up certain phrases. Belgium isn’t sure what “cold turkey” means, Austria would like to know the meaning behind “come hell or high water,” The Netherlands doesn’t understand “eat your heart out,” Sweden isn’t sure about a “walk in the park,” and Ireland doesn’t get what “zip it” means.

Misunderstood American Phrases Around the World

In the most populated country in the world, China, the most misunderstood American phrase is “rule of thumb.” India, the second biggest by population, isn’t sure what to make of “don’t judge a book by its cover.”

One theme constantly searched in many Asian and African countries was American phrases about the devil. Egypt, Iraq, Saudi Arabia, Turkey, and the United Arab Emirates all looked up “devil’s advocate” the most. Vietnam was searching for the meaning of “speak of the devil.” Afghanistan, the Democratic Republic of Congo, and Sudan looked up “the devil is in the details” (Nicaragua in Central America looked up this phrase the most too)!

Many Asian countries also weren’t sure what to make of American references to the moon. Sri Lanka and Thailand both searched for “over the moon,” the most, and Nepal looked up “once in a blue moon.”

Meanwhile, some African countries want to understand what a bucket list is. Kenya, Nigeria, and Uganda all searched for that phrase the most. South Africa wants to know what it means when there’s “something fishy” going on, and Burkina Faso wonders why “you can’t have your cake and eat it too.”

Over in the Oceania continent, every country looked up something different. Australia is determined to learn what a “couch potato” is, Fiji would like you to “cut them some slack,” and New Zealand is “head over heels” with American idioms! 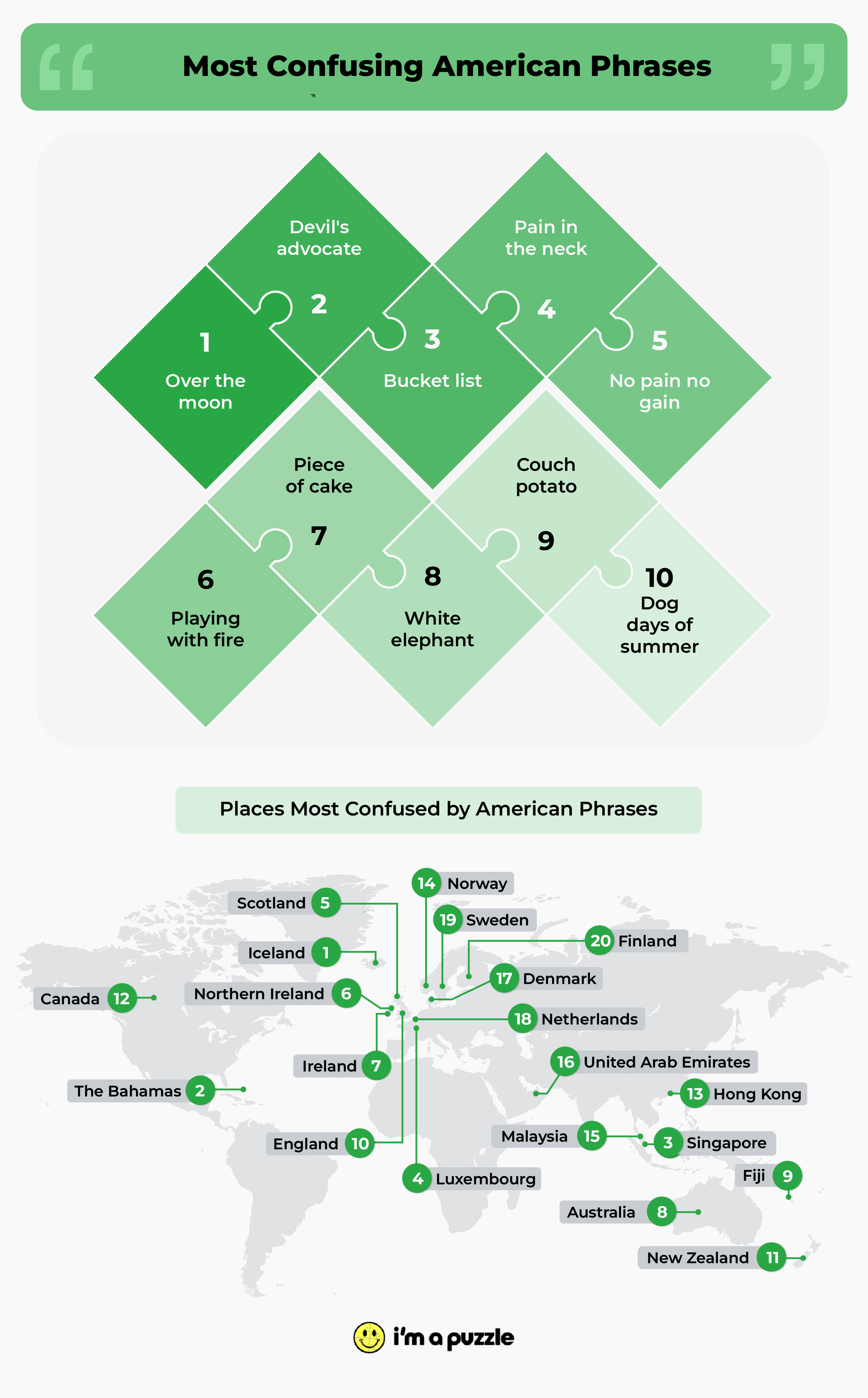 There are so many unusual American phrases that it’s hard to keep them all in order. It’s obvious from Google searches that people who are learning English as a foreign language or even just trying to learn English as a first language, have trouble making sense of these phrases.

The most confusing American phrases across the entire globe are: “over the moon,” “devil’s advocate,” “bucket list,” “pain in the neck,” and “no pain no gain.”

The country searching the most for phrases like these is Iceland! The Bahamas ranked second in total searches per capita alongside Singapore, Luxembourg, and Scotland.

We wish we had the answers to why there are so many unusual phrases and idioms used by Americans. As confusing as it is, just remember you can always finish a puzzle as long as you take some time and be patient (or maybe just turn to Google). Best of luck!

In September 2022, we analyzed Google search volume of 1,045 American phrases and idioms such as “once in a blue moon meaning,” “knock on wood saying,” and “penny for your thoughts origin” over the period of July 2020 to July 2022.

For this report, we analyzed the most disproportionately popular Google search terms. We compared each place’s search results to the international average in order to determine which search term has a higher search volume when compared to the international average. To determine the places most confused by American phrases we also examined total search volume, calculated it per capita and visualized per 100,000.

We analyzed the results from the top 50 most populous countries (where data was available), and 50 other more well-known countries/places. For example, rather than only looking at the United Kingdom data as a whole, we broke it down into England, Scotland, and Northern Ireland.

When using this data and research, please attribute by linking to this study and citing im-a-puzzle.com